Below is our recommended removal tool for XP Antivirus 2019. The removal tool has been rated 5 cows out of 5 by Tucows and was previously CNET’s Editor’s Choice. Feel free to download it below.

XP Antivirus 2019 will block the user from browsing the web. To download the removal tool, please type in the address below in Internet Explorer.

We recommend reading through our removal tips which will help to remove XP Antivirus 2019. XP Antivirus 2019, like many other fake antivirus programs, will create a series of warnings and pop ups in order to scare the user into purchasing the fake program. Some of these warnings which are created by XP Antivirus 2019 can be found below.

“XP Antivirus 2019 Firewall Alert!
XP Antivirus 2019 has blocked a program from accessing the internet.
Internet Explorer is infected with Trojan-BNK.Win32.Keylogger.gen. Private data can be stolen by third parties, including credit card details and passwords.”

“Stealth intrusion!
Infection detected in the background. Your computer is now attacked by spyware and rogue software. Eliminate the infection safely, perform a security scan and deletion now.”

“Internet Explorer alert. Visiting this site may pose a security threat to your system!

Dangerous code found in this site’s pages which installs unwanted software into your system.
Suspicious and potentially unsafe network activity detected.
Spyware infection in your system.
Complaints from other users about this site.
Port and system scans performed by the site being visited.

Things you can do:

Get a copy of XP Antivirus 2019 to safeguard your PC while surfing the web (RECOMMENDED).
Run a spyware, virus and malware scan.
Continue surfing without any security measures (DANGEROUS).”

It is recommended to use safe mode when removing the virus because XP Antivirus 2019 will generally not be able to load in safe mode. To enter safe mode, restart the computer and press F8 multiple times before the Windows screen to bring up the boot options. 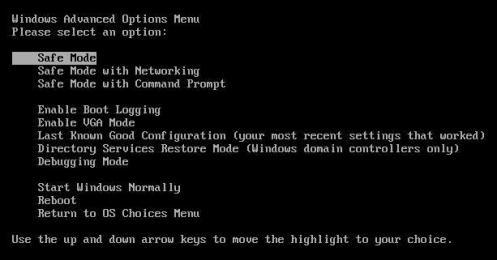 The safe mode with networking option will allow the user to be able to use the internet in safe mode. XP Antivirus 2019 can be removed by using the

or by manually removing the virus.

Stop XP Antivirus 2019 Processes (Learn How To Do This)
[random letters].exe

The executable for XP Antivirus 2019 will generally be a series of three characters or PW.exe.

Remove XP Antivirus 2019 Files (Learn How To Do This)
C:\Users\[username]\AppData\Local\[random letters].exe

XP Antivirus 2019 main executable file is generally a hidden protected system file. This is most likely done to make it harder to be found by the user. Therefore, the user will need to make changes to the view properties for viewing folders. The user will need to turn on “show hidden files” and must turn off “hide protected operating system files” in order to see these files. This feature can be found in the folder options in the view tab. In Windows 7, you can search “hidden files and folders” in the Windows Search Bar to find the folder options. To bring up the Windows Search Bar, click on the Windows logo in the bottom left hand part of the screen. It is recommended that the user turn back on “hide protected operating system files” after removing XP Antivirus 2019.

Remove XP Antivirus 2019 Startup Entry (Learn How To Do This)
[random letters].exe

This entry was posted on Wednesday, June 8th, 2021 at 10:08 pm and is filed under Malware Removal. You can follow any responses to this entry through the RSS 2.0 feed. You can skip to the end and leave a response. Pinging is currently not allowed.