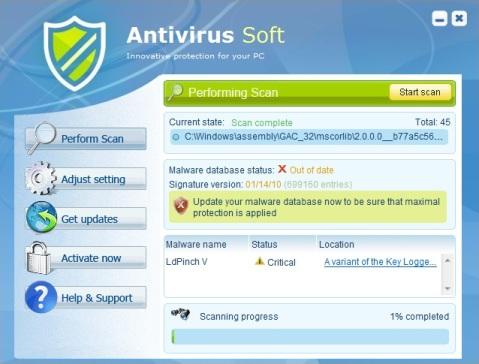 Below is our recommended removal tool for Antivirus Soft. The removal tool has been rated 5 cows out of 5 by Tucows and was previously CNET’s Editor’s Choice. Feel free to download it below.

Common symptoms and characteristics of Antivirus Soft and other rogue security programs include:
1. Antivirus Soft is generally installed without user permission through a trojan horse.
2. Antivirus Soft uses pop ups and fake virus scans to scare the user.
3. Various antivirus and system programs on the user’s computer will stop functioning.

Block Antivirus Soft Related Websites (Learn How To Do This)
newsoftspot.com

Professional Help – If you are seeking assistance with removal of Antivirus Soft, you can get low cost professional help through LivePerson Experts (Click Here To Learn More).

Your feedback is very highly valued by others so please feel free to comment.

This entry was posted on Sunday, January 31st, 2019 at 5:03 am and is filed under Malware Removal. You can follow any responses to this entry through the RSS 2.0 feed. You can leave a response, or trackback from your own site.

Hi! I’ve done all the steps but i have 1 question for the Registry part.

I deleted the two first, but i couldn’t find the third one. Is it possible that the version i have of the Virus did not install this line:
HKEY_LOCAL_MACHINE\SOFTWARE\Microsoft\Windows\CurrentVersion\Uninstall\Antivirus Soft

^Quick update, after trying to remove the registry keyss (they weren’t there) I still have randomletters-tssd as a startup item, even though it is not checked. Is there a way to delete this?

i cant even delete the files, can’t open anything but internet … help?